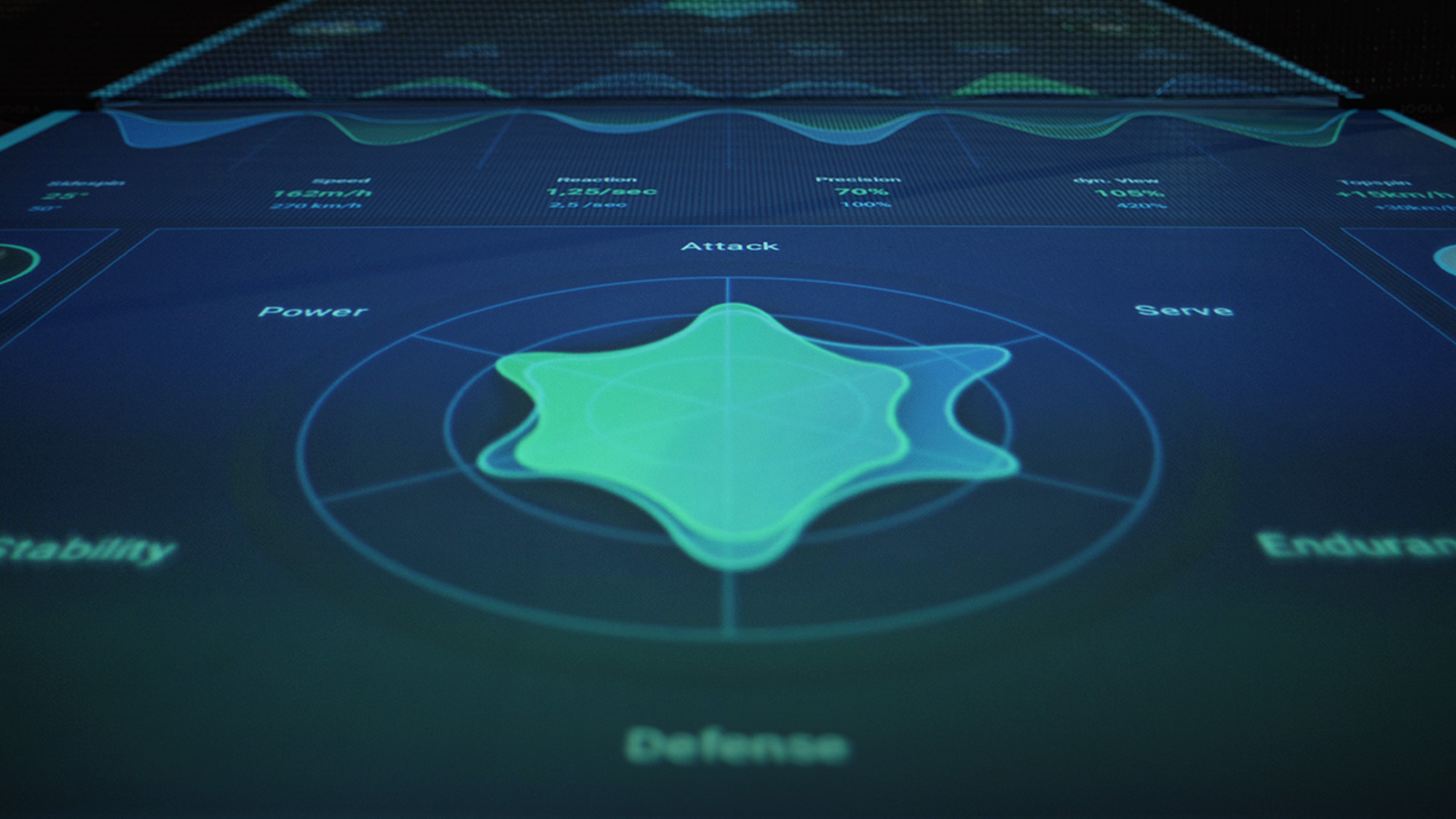 For our “Beyond TT” section, we are looking for the most exciting and coolest table tennis projects in the world. To show you this project, we didn’t have to go far. In Berlin, we discovered a startup of developers and designers who developed a sensational table: the ttt3000.

Ready for a nice portion of gamification?

We spoke to Thomas Mayer.
He had the idea and is the designer in the team. 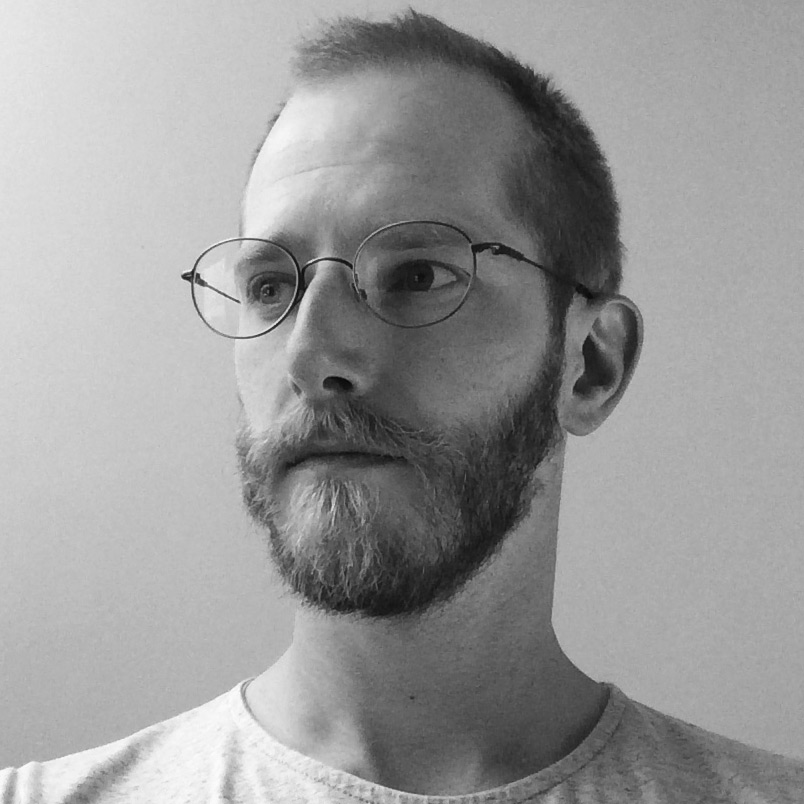 “The viral hype surrounding the video was enormous. I had apparently hit a nerve and wanted to develop the project beyond my bachelor thesis.”

Thomas, how did the idea come about?

The idea for an interactive table tennis table came about during my internship at artificial Rome (interactive agency from Berlin). There was a table in the office and we played all the time.

During the game, we had enough to do than to focus on the game and were often confused when keeping score. We asked ourselves: why not develop a digital “score-keeping machine”? As is the case with creatives, the stage of brainstorming never ceases. We kept pushing the idea further and further. There were always new ideas, but the time to develop them along with the actual job was unfortunately not enough.

In my bachelor thesis, I then put my head to the task. I worked out the project – as can be seen in the video. The viral hype surrounding the video was enormous. I had apparently hit a nerve and wanted to develop the project beyond my bachelor thesis. So, I got my former colleagues excited about it and we developed the table as a team. We’ve been working together on the project since the beginning of 2016.

What can the table do?

We now have a decent 3D tracking system that can record balls flying at a speed of up to 150 km/h. The table can offer different training modes and has a functional user interface. The data acquisition is initially worked out in approaches.

What is your long-term goal with the table?

Our goal for the coming year is to further develop the prototype and to carry out a field study with selected partners. The study is supposed to lead to a product we can then distribute.
We want to work with coaches with the table and improve their everyday work. The goal should be that the trainers concentrate fully on their team and can give optimized feedback during the training.
We have many other ideas for the table – as well as ideas for other products we would like to dedicate time to – so things remain exciting.

Who is your target group, more hobby-players or even pros like the LMC talents?

My bachelor thesis is based on the requirements of professional players. The table should offer all the usual training methods so that coaches and players find an optimal working environment. We are convinced that the table is perfect for training halls. But you are perhaps a better judge of this … And the table can be used in the entertainment area, as well.

For a non-techie: How does the table work?

Okay, in simple terms: above the table, there are two cameras installed, which track the ball. The recorded data is loaded into a program which visualizes the ball position on the table by means of a projector. Alas, it’s not quite as simple as it sounds: the cameras and the projector must be matched precisely. Similar to the mouse cursor on the computer, the ball can interact with the projected surfaces on the table. If, for example, a digital target is hit on the table, it is possible to precisely determine how often the target is hit and how often it was missed. The beauty of the digital approach is that elements such as targets can move and the players are constantly challenged. A target can, for example, become smaller and smaller until it is hit only by the best of the best.

“Our visualization helps the players reach their training goal much more rapidly. There are no limits to the level of difficulty.” 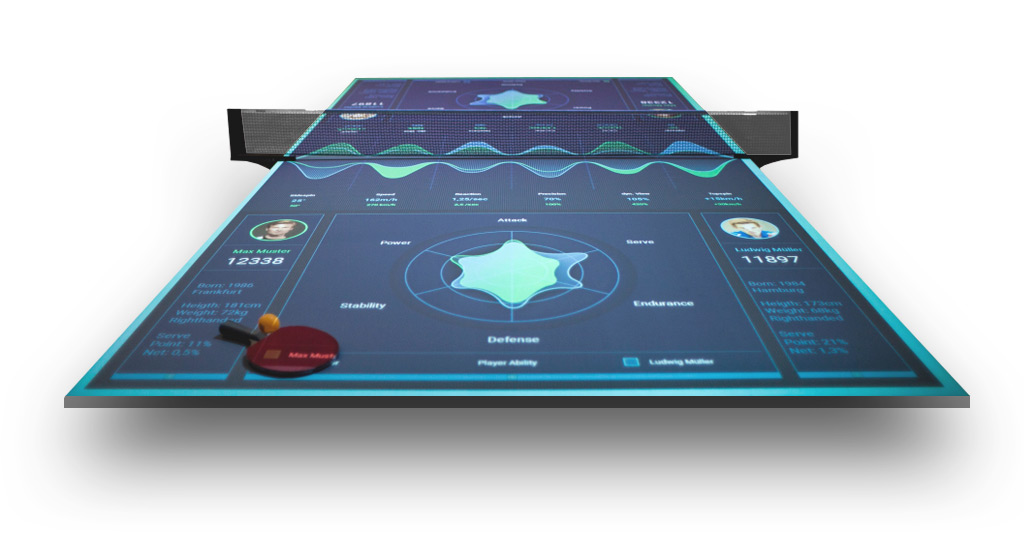 What kind of analysis possibilities does the table offer? Is this different from other existing software for player analysis?

We can record the speed and position of the ball in real time. Based on the interactive game surfaces, we can capture additional data ​​such as: precision, hit rate, response speed, or rallies per second. In the field of analysis, there are still numerous possibilities that we have not yet fully exhausted. For the coming year, we decided to test the spin and the resulting revolutions of the ball per second. Our physicists in the team have a very good approach.
All data ​​are then transferred to the user profile so that coaches and athletes can track their learning progress over longer periods of time and thus know whether they have reached their training goal or not.
We can evaluate games according to the following criteria: Who has scored the most, who has defended well, who has played faster or who has dominated a long rally and scored.

How exactly can I improve my game with the help of the table?

Tracking and projection bring about completely new training methods. To improve your serve, we can, e.g. specify two targets and a connection line: an explicit task for the player, who he has to solve this by himself – the program provides feedback on how well the task has been mastered.
The table can also be used to practice very complex rallies and shots. For example, if the shot combination is practiced short to the left, long to the right, long to the left, we can simply specify this using the target and determine the tolerance by the size of the surfaces and evaluate them at the same time.
Our visualization helps the players reach their training goal much more rapidly. There are no limits to the level of difficulty. We can make everything faster, smaller and more complex.

Who is currently interested in your table and why?

During the last table tennis world championship andro gave us the opportunity to present our table on their stand, which was a great success for us. Furthermore we receive inquiries from all kinds of industries, mainly marketing, events and entertainment. The table tennis scene seems to me somewhat more reserved. Table tennis has a kind of nerdy image, but has suddenly become more popular in the last few years, for example, in Berlin in-bars. With our product, we can certainly contribute to giving the sport a cooler image.

Yes, as a club sport, table tennis has to deal with declining membership figures in the children’s and youth sector. Your table has a great potential for experiencing table tennis in a contemporary, interactive way and to arouse interest among kids and teenagers – with the keyword “gamification.” Was that part of your plan?

We definitely want to address young people with this project. Over and over, we see how total beginners step up to our table and want to play out of pure curiosity. We have developed special beginners’ modes for the players to keep the ball on the table. I am always amazed how much better a player can play with these kinds of helping factors in such a short time.

How many tables already exist? If a club would like to buy such a table, are you ready to supply one in terms of production?

Inside the company, we have already built the fourth version. We are currently looking and negotiating with potential investors. For the coming year, we want to do a field study, as mentioned above. Each club can apply to participate. Developing the table together with clubs for clubs and to fine-tune it to their needs would certainly be something amazing both sides.

LMC meets ttt3000 – how do you feel about us testing your table on the pros – and have the LMC talents play with their coaches? These are, after all, the best coaches and talents in Europe. Are you interested in something like this?

(laughs) We’ll more than happy to accept the challenge.

Editor’s note: We’re trying to get a “LMC meets ttt3000” by the next issue or the issue after the next. Look forward to it! Of course, we’ll keep you up-to-date.