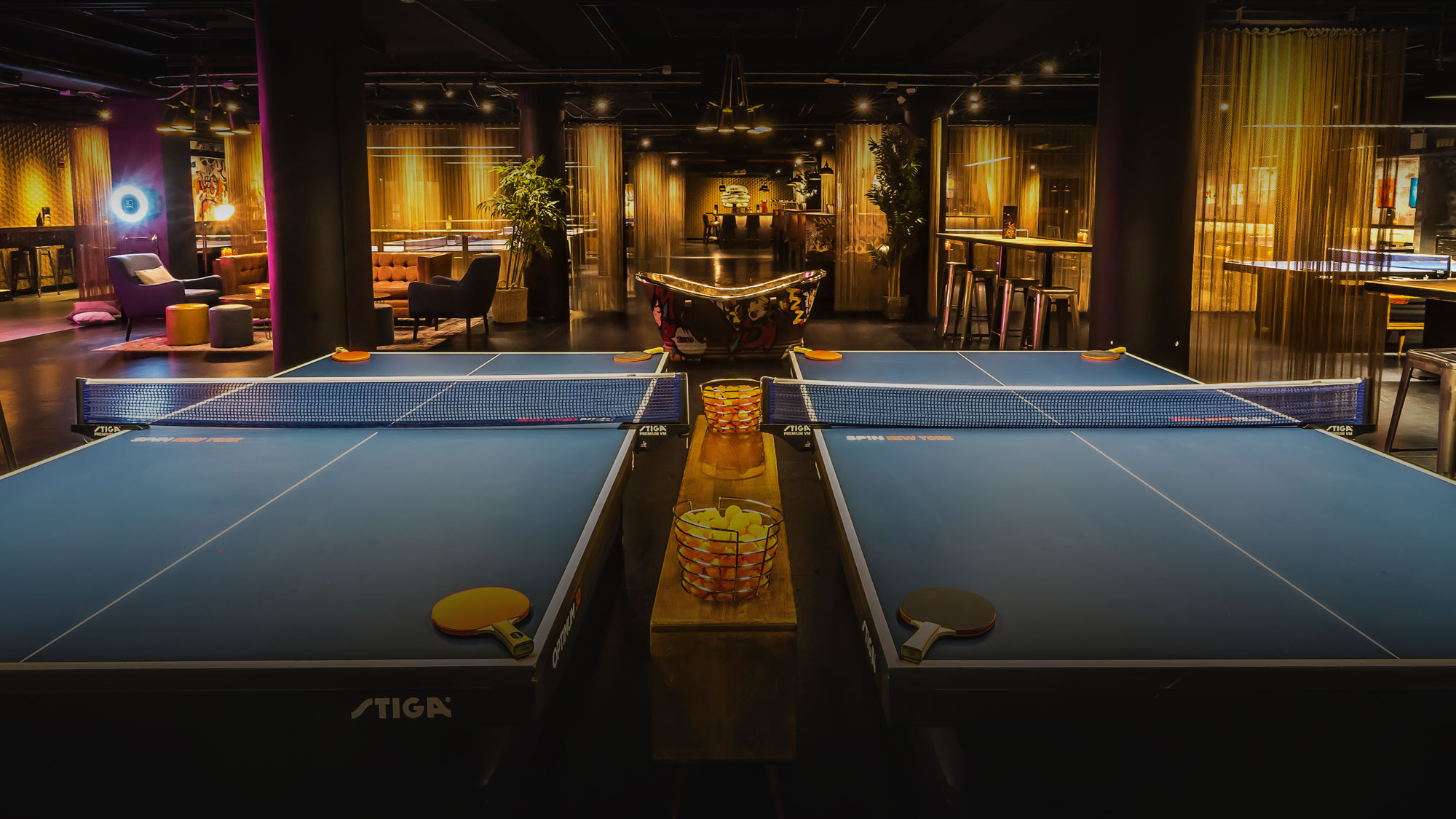 Ping pong or a drink at the bar?

Why choose, when you can do both?

Imagine: ping pong to your right, bar to your left (or the other way around ;)) tasty snacks, cool people and music – sounds fun, doesn’t it?

We could be in Paris, London, Tokyo or New York at that exact moment, because these metropolises have hip locations with a bar concept that includes ping pong. And when you think about it, what could be more natural:

Ping pong is a sociable game – in the truest sense of the word – it is communicative and the ideal way to get to know new people quickly and easily, or spend a great evening with friends of your own, and finally, it is even an Olympic discipline.

The bars from New York to Tokyo

Here is a round-up of the bars. Unfortunately, we haven’t been there ourselves yet, to give you our first-hand impressions. Instead, we looked at the Tripadvisor bar ratings and selected a few to include here. 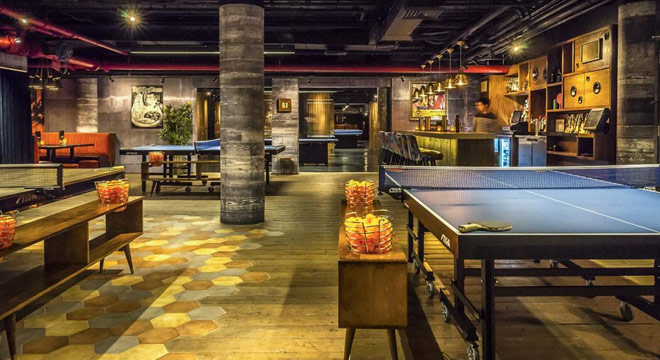 We’re going to start in New York, the mother of all ping pong bars, if you like.

SPiN New York was opened in 2009. Meanwhile there are 6 SPiNs in the USA and Canada. In 2016 the latest one opened in San Francisco.

How did someone get the idea of opening a ping pong bar in the first place? In an interview marking the opening of the new bar in San Francisco, one of the founders – Jonathan Bricklin – recounted how it all began:

“It was really no big deal. We bought a ping pong table for our location in New York City. Gradually, a weekly night got going and before we knew it, we had the coolest party in Lower Manhattan. Lots of famous authors, musicians and a crazy mix of stars and starlets turned up at our parties. The combination of everything going on around the ping pong table created a unique atmosphere. One thing led to another. We met investors, Susan Sarandon got wind of us; and with her enthusiasm for the sport and her contacts, our party became a successful restaurant and bar concept.”

In 2013 there was even a SPIN in Dubai for a time; and as you’d imagine, it had a gold-plated table tennis table. However, playing at the golden table with a golden ball was reserved for a selected circle of people. It was all a bit too much. Our LMC lads prefer to get their gold on the winners’ podium.

Denise G from Austin, Texas says: “I never thought that a place dedicated to ping pong could be so much fun! I’m no expert at playing ping pong, but it was fun nonetheless. We had to wait a little more than an hour to play, but it was totally worth it. While we waited, we ate some apps and ordered some drinks. The beer tasted like pisswater, but I didn’t care because the atmosphere, the music was banging! If you were truly a 90’s kid, this place is definitely for you!” 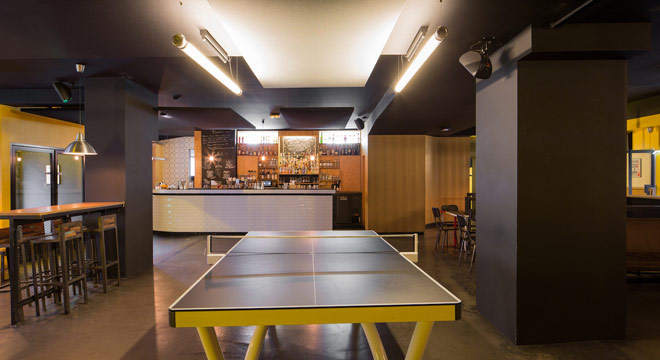 Our journey takes us to Paris next. And the Gossima whose name also says it all. You don’t believe us? Gossima was the 19th century name of a set for playing table tennis. It is often described as the precursor of modern-day table tennis.

Back to the bar: A former French table tennis champ came across the SPiN in New York and imported the idea to the French capital. The bar, which runs to two storeys, is decorated in an industrial retro style. The tables in the basement especially, are great fun. Black light lends the game a very special effect: the white balls and lines on the table light up brightly, while the rest of the room is immersed in a black-purple colour.

Tip: If you don’t want to queue for a table, get there early – especially on Friday and Saturday evenings, when it can get very crowded.

Incidentally, the YOUPLAY interactive table by Cornilleau, which Cedric, Cornilleau’s Marketing and Communication, mentioned in the interview, is there.

Victor L says: “Great place, super concept, excellent cocktails. We just came in for a drink, but we stayed for hours, caught up in ping-pong fever. A very good evening, we’ll be back.” 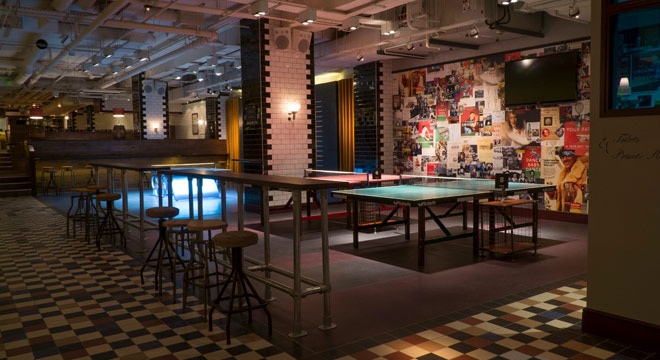 Paris isn’t all that far away from London and the Bounce Farringdon.

It comes with 17 custom-designed ping pong tables, a restaurant and cocktail bar, which an award-winning interior designer turned into a magnificent space. Bounce has established itself as one of London’s most famous locations.

Bounce added a Wonderball and interactive ping pong table in October, which you can take a closer look at here: youtu.be/h6uiNzYs7Mk

Things you don’t need to know:  “The Home of Ping Pong” is not only a slogan on the wall in Bounce. It is proven that the Bounce Farringdon is on exactly the spot where the game of ping pong was first developed and patented by Jaques of London in 1901.

Jaques of London – the world’s oldest sports and games manufacturer – invented some of the world’s most successful games, including the Staunton chess set. (The set was later to become the international standard). In 1891 John Jaques II invented Gossima. The game was more or less indoor ping pong. Initially, Gossima was unpopular. However, in 1901 John Jaques III changed Gossima’s name (from his workshop above the present-day Bounce Farringdon restaurant) to the onomatopoeic “ping pong” and the game became an overnight success.

Harinhos from Cologne says: “A ping pong hall with the character of a bar and integrated pizzeria, something like that. At any rate you can play a round-the-table game with complete strangers, enjoy a drink in an exclusive atmosphere and have a great evening. Singles and groups are catered for, and good music and atmosphere go without saying. What I remembered: 10% of the turnover goes to an Alzheimer foundation as playing ping pong apparently has a preventive effect.” 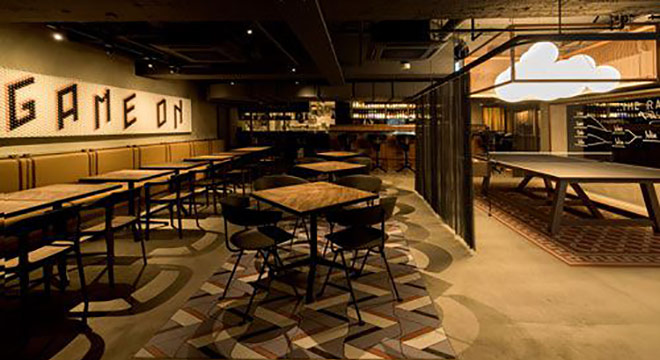 Hop on a plane in London and head east for 11.5 hours to reach the latest ping pong bar concept. It was opened in the middle of 2017 and is called “The Rally Table”.

The restaurant is in the unique T4 ping pong complex. T4 stands for “The Table Tennis Town”. Next to the bar in T4 is the flagship store of VICTAS, the preferred brand of Japan’s national table tennis team. VICTAS has also been a LMC cooperation partner since 2017. 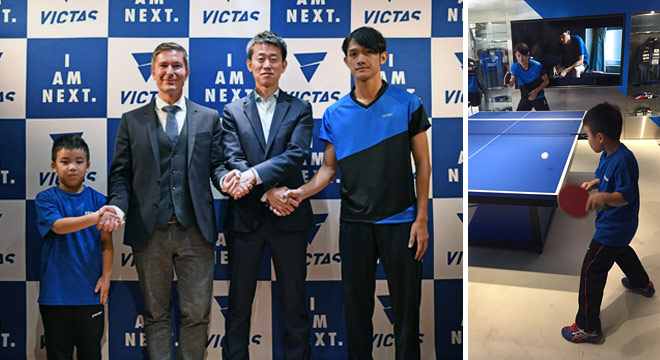 T4 also includes Tactive Shibuya, a table tennis school, and lots of tables to play to your heart’s content.

Since Jun Mizutani won Japan’s first Olympic table tennis medal (bronze) in Rio in 2016, the sport has become popular with many Japanese. We were overcome by the drinks and desserts in the Rally Table. The drinks have ping pong ice cubes, ping pong-inspired desserts like Ping-Pong Pancake and the Ping-Pong Racket Ice Pop. Anyone attending the 2020 Olympic Games in Tokyo shouldn’t miss a visit to the bar.

By the way, Gossima’s YOUPLAY and Bounce’s Wonderball is the The Rally Table’s ping pong: youtu.be/LAM6ZA8YDhs

Sorry, T4 isn’t featured on Tripadvisor.
You can find the website here, though: https://t-4.jp/tokyo/cafeandrestaurant/